As was their custom, Russ and Annette Charles rose before the sun Thursday morning to spend time talking, checking Facebook, and reading the news together before heading off their separate directions to work.

This morning, the Clinton, Mo., couple was causally discussing the 100-mile century bicycle race Russ would compete in that weekend, and where along the route Annette could best meet him with drinks and snacks to fuel his body.

Annette was facing away from him when she heard Russ make a funny noise. She glanced over to where he was sitting at the computer to see what funny meme he’d seen on Facebook.

Instead, what she saw was her 53-year-old husband slumped in a chair, not breathing. 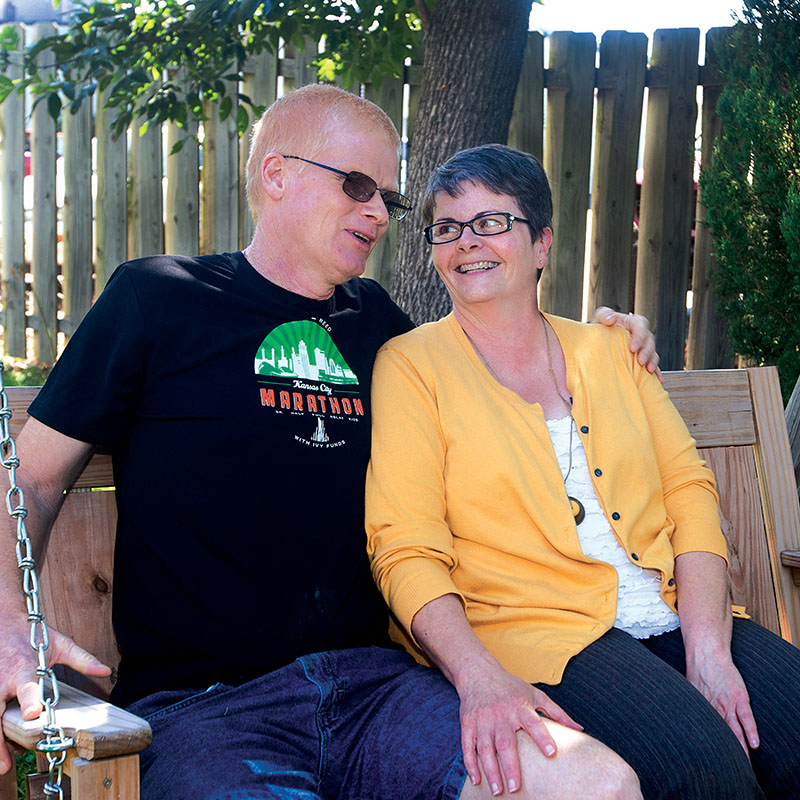 Annette says the following minutes were like an out-of-body experience.

She remembers screaming, shaking him, and then calling 9-1-1.

Annette credits the dispatcher on the phone for helping her to collect her wits.

“He asked if I knew CPR,” she said. “I’d taken a course several years ago at work, but I know my card was expired. I never thought I’d have to use it, much less at my own home.”

Nevertheless, her training came back to her. At the 9-1-1 dispatcher’s instruction, she dragged Russ onto the floor and began chest compressions.

As her head swirled, all Annette could do was watch as paramedics continued compressions, then shocked her husband several times, trying to save him.

“As they carried him out of the house, I just remember yelling, ‘We have LifeFlight! Take him to Saint Luke’s!’”

Russ was rushed to the emergency room at Golden Valley Memorial Hospital, where teams worked to stabilize him for transport to Saint Luke’s Hospital in Kansas City. They were met in the ER by LifeFlight Eagle’s medical crew, who assisted as Russ was shocked three more times before being loaded into LifeFlight Eagle’s Bell 407 helicopter for the short ride to Kansas City.

“He was in bad, bad shape,” said LifeFlight Eagle nurse Sheila Hagen, who cared for Russ along with her partner, paramedic Andrew Umland. “They call that type of heart attack a ‘Widowmaker,’ because you just don’t survive it.”

Hagen and Umland wouldn’t give up, though.

While racing 150 miles per hour toward Kansas City, they continued working on Russ. They would shock him and regain a pulse, only to have his heart stop again just a minute later. They continued aggressively treating him with medication, CPR and defibrillation the entire trip.

“There was no way we were going to give up on him,” Hagen said. “I just kept thinking that if anyone could survive this, it would be him.”

Only 32 minutes after lifting off from Clinton, Russ arrived at Saint Luke’s Hospital in downtown Kansas City, a trip that would have taken nearly 2 hours through morning rush-hour traffic.

When they landed, Russ was taken directly to the cardiac catheterization lab, where surgeons installed 3 stents in his heart.

His heart would be okay for the time, but he faced many more hurdles.

In part because of the extensive CPR Russ endured, his lungs sustained significant damage.

The same drugs that helped to save his life were now allowing blood to enter his lungs unchecked, and he was drowning in his own blood.

Doctors initially suctioned more than a liter of blood from his damaged lungs.

“They said it was a catch 22,” Annette said. “They couldn’t stop the anti-clotting medications because of his heart, but that meant that there was nothing to stop his lungs from bleeding. They were doing everything they could, but they made it clear that Russ probably wouldn’t survive.”

But Russ wouldn’t give up.

Neither would the specialists at Saint Luke’s. They conducted a rare dual-lumen intubation. Usually reserved for procedures like lung transplants, this allowed each lung to be ventilated independently, allowing them to drain blood while still keeping his body oxygenated.

They continued suctioning blood out of his lungs, but it showed no sign of stopping.

“At that point, all we could do was wait, and pray that Russ’s body would heal itself.” Annette said.

Several times during the next few days, the family was summoned to say goodbye because his passing seemed imminent.

Slowly, and over several days, the bleeding in Russ’s lungs stopped. However, the concern was how much brain damage he sustained because of low oxygen levels.

Remarkably, he suffered no neurological damage.

“We knew he was going to be okay when he came to and started making jokes.”

“It’s just a miracle that he’s okay, and that he’s here,” said Annette, as she wiped away a tear.

Russ continued to amaze his pulmonologists, cardiologists, and rehab staff, and after several months of physical therapy, occupational therapy and cardiac rehab, he was fully cleared to return to work, and eventually even to riding his bike.

“I think it’s going to be a while before I let him do a 100-mile race, though,” Annette smiled.

Annette said it was the support from the community and their faith that kept them going during the darkest times.

“Russ is living proof that God conducts miracles,” she said.

She is also grateful for the tenacity and dedication of the medical teams that worked on Russ.

“Every group had cause and opportunity to give up, and yet no one even considered it. Every person, from the Golden Valley paramedics to the amazing LifeFlight Eagle team and the people at Saint Luke’s was determined to keep him alive, and I don’t think it occurred to anyone to stop. We will be forever grateful for all their determination and commitment to their careers serving the public. We’ve been blessed to have been served by the best of the best.”

Annette: ‘4 Things Everyone Should Do’

Annette Charles knows she and her husband were lucky.

And she’s made it part of her mission in life to make sure other families improve their odds in the fight against cardiac disease.

“I feel like part of God’s plan in Russ’s survival is that I can use my voice and our experience to help change someone else’s life,” she said.

She has written stories for newspapers, they’ve done radio shows, helped chair heart walk events, and participated in numerous community events to help get the word out about several things she believes every family should consider:

When Russ collapsed at their home early that June morning, she was able to rely on her past training in CPR to help save his life, despite her panic.

“I never thought I’d have to use it, much less at my own home,” she said.

Now encouraging people to learn CPR is one of her passions.

“The statistics that support outcomes from bystander CPR are staggering. You just need to learn it. You never know when it might happen, and you might be able to help save someone’s life,” she said. “It could even be your family member.”

Take care of yourself

She is also adamant that every adult needs to take better care of themselves physically.

“Russ’s dad died of a heart attack when he was very young,” she said. It’s part of the reason that Russ started running when he turned 50.”
Russ said he was never a runner before.

“I hated it. But when I turned 50 I decided I’d better start taking better care of myself because it ran in my family.”

He started training, and eventually competed in several marathons before the pounding impact of running became too much for his knees. That’s when he turned to long-distance cycling. He was planning to compete in a 100-mile “century” bike ride the week he suffered cardiac arrest.

“He’s an active, healthy guy,” Annette said. “He’s not who you would think of having a heart attack.”However, she and Russ’s doctors credit his physical conditioning for helping him survive a “widow-maker” heart attack. His heart had developed collateral circulation around the blocked arteries he didn’t know he had.

“He’s living proof that it’s never too late to start exercising and taking better care of yourself,” she said.

Get a heart scan

She now knows there are simple, inexpensive cardiac scans that can detect coronary artery disease and blockages before someone has a heart attack.

“I wish we had known about it before. We could have found out his arteries were almost completely blocked before any of this ever happened. We could have avoided all of this.”

“The scan is something everyone needs to do. It could be a very inexpensive spring board into eliminating or reducing your risk,” she said. “It might even save your life.”

“We didn’t pay a dime, and it would have been nearly $30,000 for his flight,” Annette said. “It just makes sense, and it supports having a program in your community when you need it most.”

“Russ wouldn’t have survived a two-hour trip in an ambulance. He’s here because LifeFlight Eagle is here.”