It was a perfect family day. Shane and Jennifer Hall and their four children spent Saturday morning attending their oldest son's football game in Harrisonville, Mo., before heading to his parent's farm near Oak Grove to spend the rest of the day.

Shane, Jennifer and their kids help his parents grow large gardens there, and it was time to harvest the pumpkins. They hitched the hay wagon to the tractor and filled it with pumpkins from the field. 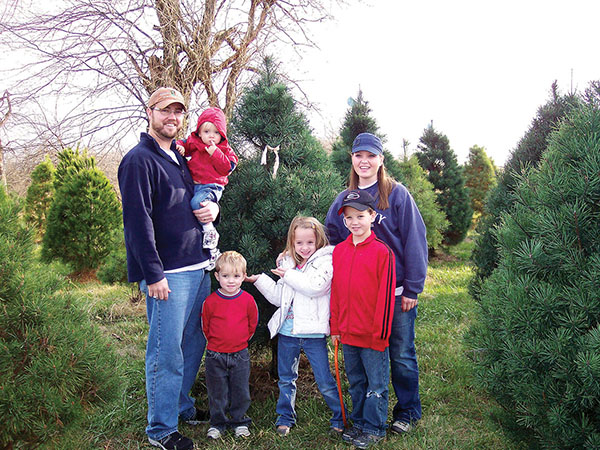 After unloading the trailer it was near dusk. The entire extended family decided to go on a hayride as they had done many times before. Shane, Jennifer and their kids loaded into the trailer along with Shane's mom, his two brothers, their wives and his niece while his dad and nephew climbed into the tractor's cab. Shane, a pastor, took his guitar and led the family singing spiritual songs while they enjoyed an evening hayride.

It was an idyllic family outing.

On the way from the field back to the farmhouse at the end of the evening, it turned into a nightmare.

A 27-year-old drunk driver speeding down the country highway had hit the slowly moving trailer at between 70 and 80 miles per hour, completely obliterating it and sending all 12 passengers flying.

What happened next was a blur.

"I hit the ground on my tailbone," Shane recalled. "I crawled over and the first thing I found was Jennifer, and next to her was my daughter, lying in the fetal position unconscious. And then when

I saw Jennifer's head, I lost it, I absolutely lost it."

Jennifer's head was a bloody mess.

"She was scalped from the top of her head forward," Shane described. "The entirety of her skin and scalp was taken off and peeled forward."

"In the moment, I thought she was gone," Shane said.

Neighbors heard the accident, called 911 and rushed to help the Hall family.

Others tended to his wife and daughter while waiting for paramedics to arrive, and Shane picked up his 3-year-old and 1-year-old sons and began pacing up and down the road, saying prayers.

Based on 911 callers' descriptions of the accident, dispatchers expected multiple serious injuries. They called LifeFlight Eagle and requested two helicopters even before first responders were on the scene.

As police, fire trucks and ambulances began arriving at the scene, paramedics and EMTs began triage.

"We were watching responders coming in from all directions when we were flying in," said LifeFlight Eagle Flight Nurse Stacey Dock, who flew in on the helicopter from Odessa. "The first responders were coming from everywhere — there were just an unbelievable amount of lights."

In a mass-casualty event, patients are evaluated by EMS personnel in a triage process to assess injuries and to determine which patients are in need of the most critical care. Then patients are assigned either air or ground transport to various receiving hospitals to ensure that no trauma center is overwhelmed with too many patients to handle all at once.

By the time LifeFlight Eagle's first helicopter arrived on scene, ground-based EMS teams had determined that Jennifer's injuries were most urgent and required the attention of the closest Level-1 trauma center — a hospital capable of dealing with the most severe trauma cases. The scene commander took Dock and her partner, Flight Paramedic Mike Hagen, directly to Jennifer.

"I've been doing this for a long time, and it was one of the most significant scalp wounds I've seen," said Dock. "She had lost a lot of blood, but otherwise looked relatively stable. We quickly assessed her, worked on controlling her bleeding, and got her in the aircraft. She was alert and responsive, but incredibly calm — it concerned me, because I was worried that she may be in shock," Dock said.

Dock and Hagen were also concerned that Jennifer might have a skull fracture or other significant head injury, and time was of the essence.

"Trauma patients with blood loss and head injuries require a rapid response, treatment, and transport to an appropriate facility for the best possible outcome," Dock explained. "A single episode of low blood pressure with a head injury can dramatically change the odds of a significant recovery,"

They were airborne and flying Jennifer toward Truman Medical Center in Kansas City only 9 minutes after landing. During the brief 12-minute flight, Dock and Hagen started IVs on Jennifer, gave her fluids, worked to control the bleeding, and gave her pain medication.
Despite her injuries, Jennifer never lost consciousness. She remembered Dock treating her on the ground and in the air.

"I wasn't able to open my eyes," Jennifer remembered, "so I couldn't see her, but I could hear everything. She was so professional. She made me feel comfortable and calm and took care of me. She was amazing."

When he was approaching the scene, Coulter said he remembered thinking to himself "Where's the hayrack?" before he realized that there was nothing left but the trailer's axle.

"It was just splinters," he said.

Coulter and Wiley were directed to Shane's brother, Dustin Hall, who had been knocked unconscious in the accident. Dustin had suffered head trauma and his ankle was completely crushed. Wiley and Coulter worked on Dustin to stabilize him and prepare him for transport to Liberty Hospital.

They were airborne less than 14 minutes after landing and en route to Liberty Hospital for a short 10 minute flight.

Dock had high praise for the first responders, especially because so many different agencies had responded as mutual aid to a mass-casualty scene in a rural area. It could have been a much more chaotic scene.

"With such a large undertaking, the EMS on the ground did an exceptional job of triaging and everyone came together to coordinate the scene and care for all of the patients," she said.

Other family members were transported by ground ambulance to nearby hospitals. Shane's sister-in-law, had a concussion and severe whiplash, and was transported to Centerpoint Hospital.

Shane's daughter, who had been asleep in Jennifer's arms on the hayride, had lacerations on her eye and arm and had lost consciousness. She was sent to Children's Mercy Hospital. Shane had suffered a back injury and was taken to St. Mary's Hospital. They didn't know it until the following day, but Shane and Jennifer's 1-year-old son had broken his leg.

The rest of the family members suffered less serious injuries and were treated at the scene or refused treatment until later. They split up to care for the children or went to the hospitals to be with family members.

After arriving in the St. Mary's Hospital Emergency Room, Shane was X-rayed. When he found out he had no broken vertebrae in his back, he left with a family friend and rushed to Truman Medical Center to be with Jennifer.

En route, he got a phone call saying that she was at least stable.

When Shane arrived at the hospital, doctors were in the process of sewing her scalp back together. The initial concern about a skull fracture and head injury had passed, and concern shifted to the fractured vertebrae in her neck and four in her back. At first she couldn't move or feel her legs. She also had a fractured face, broken fingers and other injuries.

About eight hours after the accident, Shane was able to see her for the first time in the intensive care unit. He stayed with her that night, miserable in his own pain, but unwilling to leave her side or take medicine that he feared would make his mind fuzzy.

"What they initially expected to be a month in the hospital turned out to only be a week," Jennifer said. "I was walking with a walker by then, doing occupational and physical therapy."

She was in a neck brace for a month and had to use a walker for two and a half weeks after leaving the hospital, but slowly continued her recovery. It would be a couple of months before she could resume normal activity.

They said their family and church really stepped up to help the family during the difficult recovery time – both physical and mental.

After a week in the hospital and a week staying at Shane's parents' home, Shane and Jennifer returned to their own home with their family. But with four young children it was a tall order.

"When we got home, we had people come in from church and family come into the house to help with stuff," Jennifer said. "My mom came and stayed for a while. We were with someone constantly for the first month, then the second month someone would come several times a week to help."

Dustin and the others were on their way to recovery as well.

"He's like the bionic man," said Shane. "He has more metal in the lower part of his leg than he does bone now, but he walks on it and is working and doing well."

Jennifer said it was a miracle that everyone survived, much less that they will all make a full recovery.

"It's amazing. You can't tell when you walk up to any of us that we had suffered so much trauma. The most trauma we've faced is emotional trauma."

Shane said the post-traumatic stress had been the hardest on the family.

"Situations like that do one of two things," Shane said. "They will either tear down any faith that you have or it bolsters it; makes it tighter and your roots grow deeper. And the latter was the case for us."

"It was a reaffirmation of what Jennifer meant to me," Shane said. "I don't think I knew how much until that time. You have certain moments in your life when you grow up again."

Jennifer said it had a profound impact on her as well.

"I think we've all seen life in a different light ever since the accident," she said. "You can't look at the pictures or talk about it without knowing that I was preserved in an amazing way."

"You gain this perspective of 'There's something left for you to do."

"You look at life in a whole new way, because when it could have been completely stripped away from you and you still have it, you definitely cherish your moments and you look at life very, very differently."