As part of their 60th wedding anniversary celebration, Members Bob and Maurine Clem visited LifeFlight Eagle's base and helicopter in Trenton and met its crew.

When Bob Clem woke up, he felt funny.

"It felt like somebody was a sittin' on me," he remembered.

His wife was working at a 4-H camp and he was home alone, so he decided to drive himself to the doctor to get checked out.

"I thought maybe something's happening, I better go see about this. Those dumb things that you do when you don't know any better."

It turned out he was having a heart attack.

"I farmed all my life. Heck, you know, I've been bummed up, run over, kicked and everything else. It wasn't too bad."

But it was bad enough that after examining him, doctors at Wright Memorial Hospital in Trenton, Mo. knew that without specialized attention, Bob's life was in grave danger. 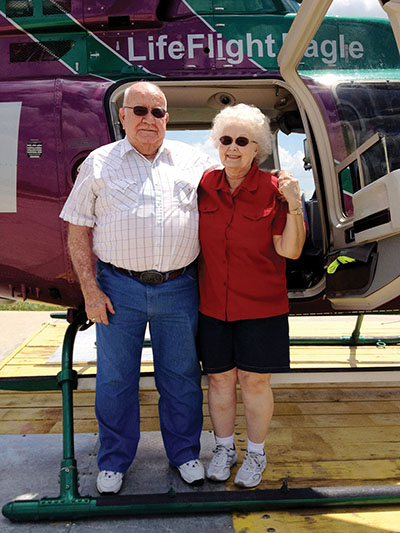 They called LifeFlight Eagle to transport him by helicopter to Saint Luke's Hospital in Kansas City, where cardiac specialists could provide Bob the critical care he needed.

Bob's wife Maurine made it to the hospital in time to see him before he was flown to Kansas City.

"When it's a heart attack, you just kind of lose it," she said. "It's a scary time, but miracles happen. He was a miracle for sure."

While in the care of a LifeFlight Eagle Flight Nurse and Flight Paramedic, the helicopter transported Bob in about 32 minutes. It was a trip that would have taken nearly two hours by ambulance.

"When he got down there, the heart doctor said 'I don't know who took care of you, but they did everything right or you wouldn't be here," she remembered. "That gives you a lot of confidence in the doctors up here in Trenton and also in the helicopter crew. They were working constantly to take care of him. You can tell they care — that makes everybody feel better to know they have somebody like that flying with them and helping their loved one."

Bob recovered, but about a year later he had a second heart attack. Again he found himself in critical condition and in the care of a LifeFlight Eagle medical flight team as they flew to Kansas City.

He pulled through again and takes it a little easier these days, savoring his retirement more. He makes regular trips to Kansas City now to visit the cardiac specialists, and he has undergone further proactive treatments. He's now up to nine stents in his heart.

Bob and Maurine have been LifeFlight Eagle Members since the Trenton base opened in 2007. They take comfort in knowing that life-saving air transport is available quickly in their community, and they try to support LifeFlight Eagle any way they can.

"We just want to say thank you for the wonderful service up here," she said.

Bob and Maurine recently celebrated their 60th wedding anniversary, and visited LifeFlight Eagle's base in Trenton as part of their celebration.

"They were great," she said. "They were so nice. You've got a great bunch working up here."