Because Jean and Jim Bishop were LifeFlight Eagle members, they owed nothing out-of-pocket for the flight that helped save Jim’s life after he suffered cardiac arrest and collapsed.

Jim Bishop came home from work in Chillicothe early on Nov. 30 because he wasn’t feeling well. Ten minutes later, he collapsed at the bottom of the stairs — his heart stopped.

His wife, Jean, heard him fall and ran to Jim, who was gasping for air, barely breathing.

She called 911 and started CPR. 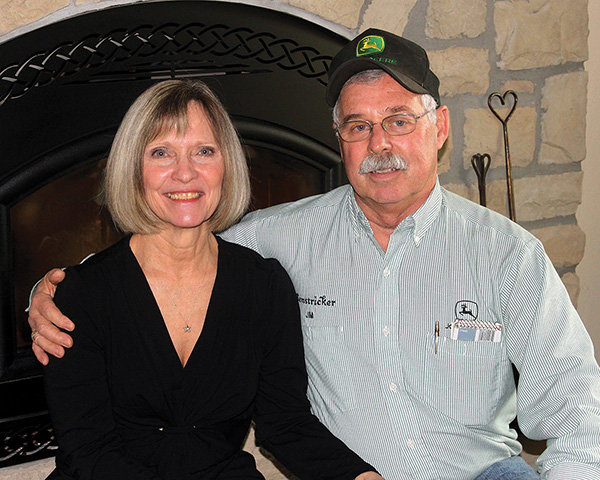 After a sheriff’s deputy and two ambulance crews arrived to help, Jim was taken to Hedrick Medical Center in Chillicothe.

“We got to the hospital and LifeFlight Eagle was already there, waiting. I just remember being grateful that we had a membership.”

In the emergency room, his heart stopped three more times before medical teams stabilized him enough to fly to Saint Luke’s Mid America Heart Institute in downtown Kansas City, where he could receive the expert care he needed.

Jean remembers talking to LifeFlight Eagle Flight Nurse Diane Anderson as they were getting ready to load Jim in the helicopter.

“She came up to me and got my cell phone number…She said she would call me when he was stable. I remember thinking…I didn’t think he was gonna make it.”

Family friends offered to drive Jean to meet Jim at the hospital in Kansas City. They swung by her house so she could grab some things, and after less than 10 minutes, they were on the road, hoping for the best, but fearing the worst.

“We’d been driving for a little over an hour — we were just south of Kearney. The phone rings and she tells me they have him stable, that they had put in a stent, that he was stabilized and that he was in ICU. I just lost it. I just cried and praised God because he was still alive. I was so afraid he wasn’t going to make it.”
Because of the rapid transport by LifeFlight Eagle, Jim arrived safely at Saint Luke’s Hospital only 35 minutes after leaving Chillicothe, and was already out of surgery and in the intensive care unit before he would have arrived at the hospital by ground ambulance transport.

“I’m just so grateful,” she said. “Everybody just performed their job brilliantly, from the paramedics here to the hospital crew to the helicopter crew. They’re just so incredibly amazing at their job.”

Because the Bishops were LifeFlight Eagle members, they incurred no out-of-pocket expense for Jim’s life-saving flight.

“Oh, my gosh. We were so grateful to have the membership,” Jean said. “To not have that financial burden on us is huge.”

“I don’t know why someone wouldn’t be a member. It gives such peace of mind. I tell everyone I know to sign up.”

For more information about LifeFlight Eagle Membership, or to sign your household up for only $59 per year, call 800-936-9533 or visit www.lifeflighteagle.org.