"I knew right away it was his heart," said Helen Ramsey. "He was setting up his guitar when he started gasping for air and he fell forward and hit his head."

Phil Ramsey's heart had stopped beating and he was in sudden cardiac arrest.

Ramsey, an active 70 year-old musician and retiree, was setting up his steel guitar and preparing for a band performance at the New Life Assembly of God church in Archie, Mo., when he collapsed. 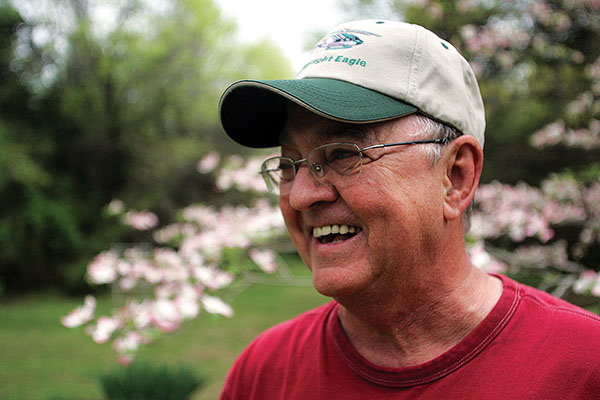 Helen said it took a few moments for everyone to grasp what was going on and to call an ambulance. While they were on the phone with 911, Clayton Knepp kicked into action.

Knepp, who happened to attend the performance that night, is a CPR instructor and lives next door to the church. Knepp immediately started chest compressions and rescue breathing on Ramsey.

Within a few minutes of the 911 call, a basic life support ambulance from Archie arrived and took over care of Ramsey. Several minutes later another ambulance arrived from Central Cass County Fire Protection District to provide further assistance.

Within 12 minutes of receiving the call, LifeFlight Eagle's Harrisonville-based Eagle 2 helicopter and medical team were at the hospital ready to transport Ramsey. Sixteen minutes after departure from the hospital, Ramsey arrived at Saint Luke's Hospital in Kansas City, Mo., a trip that would have taken three times as long by ambulance.

When a heart stops pumping, oxygen-rich blood stops flowing to the brain, which can result in brain damage within minutes if not treated.

Hypothermia lowers the body's and the brain's temperature and metabolic rate, essentially putting the body and brain into slow motion. That means that the brain requires less oxygen to function, and it is therefore at a lower risk of suffering brain damage.

Intervention by a bystander performing CPR, paramedics and physicians as well as rapid transport by LifeFlight Eagle bought Ramsey enough time to allow the hypothermia treatment to be used successfully. The treatment gave the medical team at Saint Luke's time to install a pacemaker and treat his heart while minimizing neurological damage.

According to the American Heart Association, less than 8 percent of people who suffer sudden cardiac arrest outside of a hospital survive.

LifeFlight Eagle flight nurse Scott Wiley said every piece of the puzzle fell into place perfectly. "They called 911 quickly, a bystander did high-quality CPR quickly, he received rapid transport to the hospital and the doctors activated LifeFlight Eagle to get him to a higher care provider quickly."

Almost two years later, Ramsey still can't remember the few days leading up to his cardiac arrest, but otherwise he is feeling good. "I've got bigger and greater things to do. I'm just glad to be here. Life is fun when you get a second chance."

EMS treats about 300,000 victims of out-of-hospital cardiac arrest each year in the U.S.

Fewer than 8 percent of people who suffer cardiac arrest outside the hospital survive.

Sudden cardiac arrest can happen to anyone at any time. Many victims appear healthy with no known heart disease or other risk factors.

Sudden loss of responsiveness—No response to tapping on shoulders.

No normal breathing—The victim does not take a normal breath when you tilt the head up and check for at least five seconds.

Chest discomfort—Most heart attacks involve discomfort in the center of the chest that lasts more than a few minutes, or that goes away and comes back. It can feel like uncomfortable pressure, squeezing, fullness or pain.

Discomfort in other parts of the upper body—Symptoms can include pain or discomfort in one or both arms, the back, neck, jaw or stomach.?

Shortness of breath—With or without chest discomfort.

Other sign may include breaking out in a cold sweat, nausea or light-headedness.

To find a CPR class near you or more information on cardiac arrest and heart attacks go to www.americanheart.org.