Speed is essential when treating strokes

It was a typical Wednesday evening at work on Dec. 2, 2009, for mechanic Harold Denman. He was working on a truck when he started feeling a little queasy.

"There had been a bug going around, so I just thought I was getting a cold, didn't think much of it," said 56-year-old Denman.

But his supervisor saw something Denman didn't see. 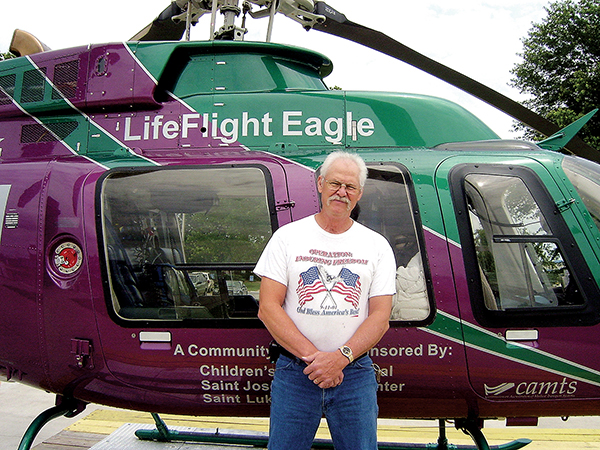 Denman was pulling a part from the back room when he told his supervisor, "I can't see this part much less tell you what it is."

His supervisor knew something wasn't right and called 911.

Nakoneczny said that Denman's symptoms — dizziness, nausea, weakness, serious headache and blurred vision — all pointed to a stroke and credited the 911 responders for recognizing that Denman needed to get to a hospital quickly.

LifeFlight Eagle's medical crew stabilized and monitored Denman during the short flight. "We have all our monitors so we can monitor blood pressure, heart rate, heart rhythm, oxygen saturation. We provided him with oxygen, started a second IV, gave pain medication and more medication for nausea.

We are kind of like a little emergency room in the air," Nakoneczny said.

Only 19 minutes later, he was at Saint Luke's hospital, where the Saint Luke's Hospital Code Neuro medical team determined with a stroke scale that he was having a major stroke.

"They [Saint Luke's Hospital] are the brain and stroke center so we thought that would be the best place for him." Nakoneczny said. "They have a neuro team...that can be ready to treat him when he lands."

The staff from the Saint Luke's Brain and Stroke Institute's Code Neuro team worked on Denman as soon as he arrived at the hospital.

Tony Nunn, an RN with the hospital's Code Neuro team, said the stroke center has people "dedicated 24-7 to provide the kind of care needed in stroke reversal."

Nunn said Saint Luke's is able to treat and reverse as many as 30 percent of all stroke patients that come to them. The national average is 2 to 3 percent. Nunn said that too often, though, Saint Luke's doesn't get the patients in time.

"Time is critical, there is no question of that," Nunn said.

In part because of the quick 911 call from his supervisor, the recognition of symptoms by Harrisonville ground EMS crew, and the swift transport by LifeFlight Eagle, Saint Luke's team was able to treat Denman's stroke and reverse the damage.

After a couple days in the intensive care unit at Saint Luke's, Denman was moved to a regular floor to work on his rehabilitation.

"I could see other people there that were much worse off than I was," Denman said. "And by that I said 'I am not going to let this hold me down.' I worked on it hard. I think I wore my wife out with all the trips that we made around the hallway there — I did a lot of walking. They told me that the more walking I did and the more I worked, the better off I would be. And I did just that. I didn't let it slow me down, I wasn't going to let it get me down," he said.

Denman was in rehabilitation for two weeks after he was released from the hospital and he returned to work January 5, a little over a month from when he was flown from work.

"There are numerous times during the course of the night I hear [LifeFlight Eagle] coming or going and I have watched them on my breaks flying into the airport," Denman said.

He was determined to someday meet the LifeFlight Eagle crew that helped save his life.

A few weeks after his return to work when he was getting off work about 2 a.m., he got his chance.

"One night I saw them flying in. I knew that bird. This is my opportunity to go in and see these people and thank them for what they have done," he said. "I was very thankful for the people who helped me."