Winter weather can be the best flying weather for EMS helicopter pilots.

Unfortunately, winter flights also involve hidden dangers not always apparent to non-aviation personnel. These hidden dangers can have catastrophic consequences if not properly accounted for. As a result, pilots and air crews must be conservative during winter months to prevent inadvertently placing themselves, their aircraft and their patient in dangerous situations. 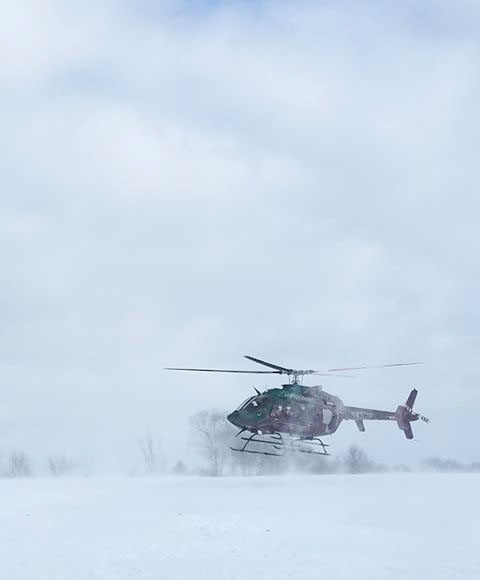 Like any other profession that operates outdoors in cold temperatures, EMS pilots must use extra caution when preparing crews and aircraft for winter operations. Despite being in climate-controlled conditions inside the aircraft, medical crew members must be dressed and prepared to spend extensive time in the elements at a scene. Likewise, they must be prepared in the case of an emergency to survive in extreme conditions. Crews dress in layered clothing, which sometimes slows their response slightly.

Aircraft must be kept hangared

When not flying, aircraft must be kept inside to avoid accumulation of frost on the rotor blades and windshields. Heaters placed in the aircraft outside can keep frost off windows. However, rotor blades must be defrosted prior to flight. This requires either moving the aircraft into warmer conditions where the frost can melt, or starting and running the engine and blades for a period of time, then shutting down and inspecting blades. Pilots and crews must be vigilant in monitoring the conditions and ensuring their aircraft is properly prepared for flight.

LifeFlight Eagle keeps all aircraft hangared when forecasts predict frost conditions, but it may result in slight delays while the aircraft is moved to the helipad for launch following a flight request.

The biggest danger to winter weather flying for helicopter air ambulances is freezing precipitation or icing. Icing conditions in flight must always be avoided. When ice forms on rotor blades or airplane wings, they lose their ability to provide lift, and the aircraft can no longer maintain flight. The additional weight of ice freezing on the fuselage of an aircraft compounds this problem.

Unlike larger fixed-wing airplanes, helicopters aren’t equipped with anti-icing equipment that would allow them to fly in icing conditions. Even in the days of advanced radar, not all precipitation is visible and it is sometimes difficult to predict. If there is a threat of freezing precipitation or icing, helicopter pilots must utilize caution when accepting flights.

The temperature lapse rate isn’t a constant number, and temperatures at altitude can vary significantly over just a few miles distance. Therefore, when there is a threat (forecast) of any precipitation below 40 degrees, the pilot may not be able to accept the flight. Even if the weather may appear fine on the ground, it may be very different at altitude. All EMS pilots have access to advance weather information that depicts freezing levels, temperature at various altitudes, etc.

The rapid temperature changes we experience here in Kansas and Missouri can result in increased chances for fog. When the temperature is below freezing and bordering on extreme cold, the chances of fog decrease. However, in the 32-50 degree temperature range, fog can develop quickly when temperatures change. Because helicopters fly at lower altitudes where fog is a significant safety hazard, pilots must be extremely cautious to avoid flying into fog-prone conditions. Any time the temperature and dew point are within 4 degrees of each other, extra caution is utilized.

Snow is another threat to helicopter air ambulance flights. While light snow generally is not an issue on most aircraft, heavy snow causes no-fly conditions. Reduced visibility in heavy snow showers happens quickly. Snow accumulation on helicopters while they are sitting on the pad must be cleared prior to starting the aircraft. Engine intakes are designed to deter ingestion of snow while in flight, but when stationary on the ground, snow accumulates around intakes and must be removed prior to starting the engine. This is another reason LifeFlight Eagle keeps its aircraft hangared when not in flight during winter months.

Helicopter Air Ambulance flights can and are completed safely and successfully in winter weather. However, requesters may notice it takes longer as we perform weather checks and confirm current and forecast conditions at our base, at the patient’s location, and en route to the receiving hospital. We will always maintain a high level of conservative decision-making to ensure we never compromise the safety of the aircraft, our crew or our patient.

Kurt Williams is the Area Operations Manager for PHI Air Medical (LifeFlight Eagle’s air operator), and longtime lead pilot at LifeFlight Eagle’s Clinton base. He is also a past president of the National EMS Pilots Association.