“We’re thrilled to get this project underway and to become a bigger part of this community,” said Roxanne Shanks, LifeFlight Eagle’s CEO, at a celebration luncheon that followed a frigid shovel ceremony. “This community has been so welcoming.”

“We’re extremely grateful to the City of Chillicothe and to all of you for making this happen,” Shanks said to the room full of city officials, emergency responders, community and business leaders and LifeFlight Eagle personnel. “We’re truly blessed to have great partners to work with at the city, at the hospital, and at the Fire Department. We look forward to working with everyone here even further in the future as we explore ways to positively impact the community.”

Last week, the city council awarded the contract to construct the hangar and crew quarters to Burman Construction out of Ozark, Mo., which had submitted the low bid. Construction will begin on the facility within the next 10 days, and is expected to be completed in August, 2017. 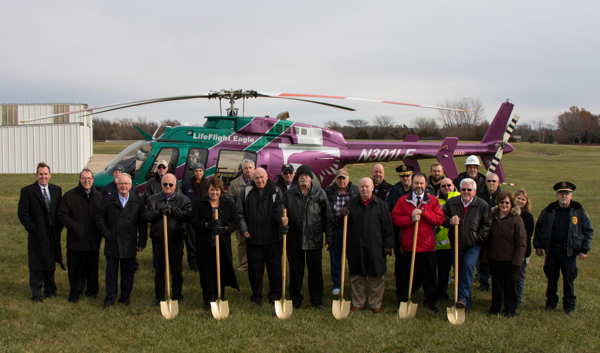 LifeFlight Eagle has signed a 15-year lease with the city for the facility and has options for multiple 5-year extensions.

The base will include a hangar for LifeFlight Eagle’s specially equipped helicopter, as well as crew quarters, where a pilot, flight nurse and flight paramedic are on duty 24 hours a day, 365 days a year.

“I think it’s a great advantage with our new hospital and for the region to get first-class care and response in an emergency,” said Chillicothe City Administrator Ike Holland. “It’s a win-win for everyone.”

When the new base is completed in Chillicothe, LifeFlight Eagle will relocate its aircraft and crew from their existing base in Trenton.

LifeFlight Eagle has had a base in Trenton since 2005, but began looking for alternate base locations after a 2014 flood forced them out of their base for nearly three months.

“After the flood we began exploring options with the City of Trenton and surrounding areas to move our helicopter and crew to a location that would allow us to better fulfill our mission by eliminating the challenges we currently face with flooding and localized fog at that location,” Shanks said. “The Chillicothe airport emerged as the place that would enable us to best serve the needs of families in the entire North-Central Missouri region.”

The program signed a letter of intent with Chillicothe in March, and has been working with city officials and architects to finalize plans since that time.

Jeff Willhite, LifeFlight Eagle’s vice president of program operations said the program expects to be able to respond to more requests for emergency transport in the region because the new location would not suffer the same localized fog issues, and that it would provide the needed weather reporting information to quickly determine suitability for flight.

“We want to reassure families in Trenton and the surrounding communities that we are not abandoning them. Our new location is a short 8-minute flight from Trenton,” said Daugherty, who oversees LifeFlight Eagle’s membership program and community relations. “We appreciate the tremendous community support we receive from Trenton, and we will continue to be involved in community events, and of course continue to serve the emergency transport needs of the community.”

Daugherty said that LifeFlight Eagle is working with Wright Memorial Hospital, Grundy County EMS, 9-1-1 dispatchers and other emergency responders to expand early launch protocols and other processes to maintain if not improve response times to the community.

He said the new base location would enhance the program’s response times to many communities in the region, including Carroll, Linn, Caldwell, Clinton and Chariton counties, among others.
About LifeFlight Eagle
LifeFlight Eagle is a 501(c3) non-profit organization that provides life-saving helicopter transport for critically ill and injured patients in Kansas and Missouri communities surrounding Kansas City. In 2016, it celebrated its 20th anniversary and the more than 26,000 patients it has flown since its formation in 1996.

Its roots date back to 1978, when Saint Joseph Hospital in Kansas City launched the Spirit of Saint Joseph LifeFlight program, which was the fifth civilian helicopter ambulance program in the country.

The LifeFlight Eagle system now includes four helicopters based in Trenton, Odessa, Clinton and Harrisonville, Mo., as well as an additional helicopter dedicated to the Children's Mercy Critical Care Transport Team in Kansas City, which is specially designed and staffed to serve neonatal and pediatric patients.

All of LifeFlight Eagle's bases are staffed 24 hours a day, 365 days a year with a pilot, flight nurse and flight paramedic. Our aircraft are operated and maintained by PHI Air Medical, a partner that sets the bar for quality and safety in the air-medical industry.